The Element by Westin is an extended stay, all-suites hotel which is part of the Marriott family of brands.  Its core concept is to promote a balanced lifestyle for mid to long-term travelers. 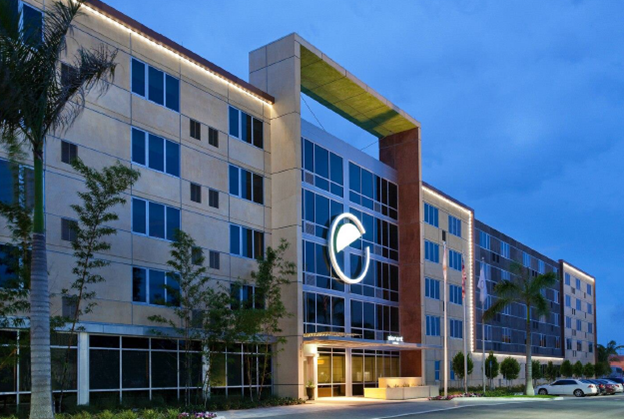 This LEED CERTIFIED – Silver; 209 all-suites hotel benefits from its premier location directly adjacent to Miami International Airport (MIA) which surpassed a historic milestone in 2019, serving over 45.9 million passengers. The property hosts 209 guestrooms and sits on 5.19 acres. The Hotel has recently undergone a $3 million PIP ($14,354 per key) that was completed in 2018/2019, which will offer us the opportunity to realize upside potential and additional value upon stabilization post-Covid-19. Guests have the convenience of being close to the airport and enjoy modern amenities available on-site: Rise Breakfast Bar & Restore Gourmet Pantry, Relax The Salon at Element, Outdoor Patio and Fire Pit, fitness center, heated outdoor pool, business center, onsite laundry, and complimentary airport shuttle.

The Hotel sits on NW 25th Street and NW South River Drive, providing ease of access to the Airport Expressway, while only a short drive from downtown Miami and the region’s expansive shoreline. Within walking distance of the Hotel are the 131-acre site for David Beckham’s planned $1 billion sports and entertainment venue which will become home to Miami’s upcoming Major League Soccer team and will contain over 1 million square feet of office, retail, and commercial space (Miami Freedom Park). 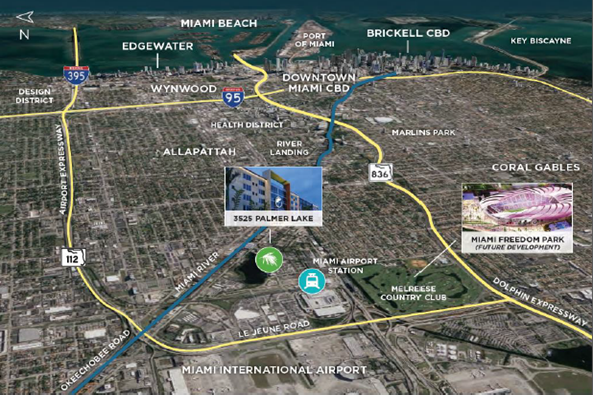 The Element Hotel sits on 5.19 acres of freehold land and is approximately 135,811 SF. To re-build this hotel today would cost approximately $50 million including land.  The total acquisition price, including costs, is $31.5 million, ultimately acquiring this at a substantial discount to replacement cost. There is also limited supply entering the market as land is scarce and expensive. Land in the area is valued at around $2 to $2.5 million per acre.

The Element benefits from an excellent location, as it is directly adjacent to one of the country’s most heavily trafficked international airports within one of the most frequented cities. Miami International Airport recorded 45.9 million passengers in 2019. Miami is one of the country’s most popular vacation spots. From the trendy nightlife of South Beach to the bustle of Calle Ocho, there are a variety of opportunities to explore in the city. In addition to its beautiful shoreline and picturesque beaches, Miami features an eclectic mix of diverse neighbourhoods, attractions, art, and restaurants. Additionally, less than 2 miles from the Hotel is the 250-acre Waterford at Blue Lagoon office park, featuring over 100 multinational companies and more than 1.6 million square feet of class A office space. The Element’s current location among innumerable established and developing demand generators, combined with its recent renovation, offer investors the opportunity to gain an asset primed for substantial and sustainable growth in performance for the foreseeable future.

Miami has experienced a less dramatic drop in passenger count compared to the other top US international airports. As of YTD June 2021, MIA ranked as the busiest international airport in the country with more international passengers than any other U.S. airport, surpassing both JFK and LAX. These numbers indicate a strong recovery is underway. The airport’s growth and performance are demonstrative of Miami’s status as the Southeast’s economic, financial, and cultural epicenter. Moreover, the Element benefits from its position in an area exploding with new developments, as the city of Miami’s luxury status has attracted both domestic and international capital. Within walking distance to the Hotel is the site for the planned $1 billion Miami Freedom Park, which will be the eventual home to Miami’s new professional soccer team’s stadium and more than 1 million square feet of office, retail, and commercial space upon completion.

As a leading economic engine for Miami-Dade County, Miami International Airport (MIA) is the nation’s third-busiest airport for international passengers and the busiest U.S. airport for international freight. MIA boasts over 100 air carriers and offers more flights to Latin America and the Caribbean than any other U.S. airport. American Airlines, the airports’ dominant airline, has announced it will expand its reach from MIA by the end of the year with 2 new international routes to Mexico and Colombia and 6 new domestic routes to Albany, Burlington, Madison, Salt Lake City, Syracuse, and Tulsa. The announcement includes a significant increase in daily flights to some of its existing routes which will bring the Airline’s total operated daily flights up to 341 by the end of 2021. Additionally, MIA added new passenger airlines to its roster: Jet Blue, Southwest Airlines, Spirit Airlines and Emirates Airlines will operate a total of 54 new daily flights and other weekly flights to Central America, the Caribbean and Dubai. While the global cargo demand in 2020 decreased by 10% in 2020, MIA’s cargo volume increased by 3% to a record high of 2.32 million tons, some of which is largely attributed to the increased demand for e-commerce. With 40 cargo airlines, MIA is the largest international cargo hub in the US.

Despite the negative impacts of Covid-19 the overall economy and the decline in air travel traffic, Miami has experienced a less dramatic drop compared to the other top US international airports. As of YTD June 2021, MIA ranked as the busiest international airport in the country with more international passengers than any other U.S. airport, surpassing both JFK and LAX. These stats indicate a strong recovery is underway. The airport’s growth and performance are

demonstrative of Miami’s status as the Southeast’s economic, financial, and cultural epicenter. Moreover, the Element benefits from its position in an area exploding with new developments as the city of Miami’s luxury status has attracted both domestic and international capital.

Within walking distance of the Hotel is the 131-acre site for Miami Freedom Park, David Beckham’s planned $1 billion sports and entertainment venue which will become home to Miami’s upcoming Major League Soccer team and will contain over 1 million square feet of office, retail, and commercial space. Plans call for a 25,000-seat stadium, which will host Club Internacional de Fútbol Miami’s (Inter Miami) home games, as well as an office park, commercial campus, and public park to be developed at the city-owned Melreese golf course.

Port Miami is one of the main economic engines of South Florida and is considered the cruise capital of the world. The cruise port supports over 325,000 jobs and contributes over $42 billion to the local economy. New Royal Caribbean office campus is under construction, hosts 350,000+ SF of office, 2,000 new jobs, 4 new terminals, over $1 billion in additional investments. 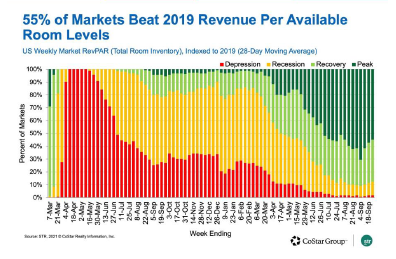 Covid-19 has had a material impact on travel and tourism across the world. Although most of the world is still feeling a significant impact from the virus, the U.S is a world leader in tourism recovery even with difficult border restrictions, and limited transportation access.

The United States tourism surge has come back much faster than expected and demand is growing at a record speed. As of the week ending September 8th 2021, 55% of US markets beat 2019 Revenue per available room.

Miami, more specifically, experienced a period of unprecedented growth and prosperity prior to the pandemic and is undergoing a rapid recovery because of that momentum. The Greater Miami area is one of the top hotel markets in the United States by performance statistics prior to the pandemic. Year to date August Miami has the highest Revenue Per Available Room (Revpar) in North America.

As one of the fastest recovered tourism markets, Miami is experiencing and expected to continue to experience the “roaring 20s” and consumer revenge spending resulting from Covid lockdowns.

This website does not constitute an offer or solicitation of any kind to buy or sell any securities that may be referred to herein. This communication is for informational purposes only and is intended for institutions, investment professionals, consultants and subscribers. This website is not intended to provide specific individual advice including, without limitation, investment, financial, legal, accounting or tax. Please consult with your own professional advisor on your particular circumstances.

Important information about the Trinity Hotels Fund – I (“Trinity”) is contained in applicable offering documents, including without limitation, commissions, administration fees, management fees and expenses that may be associated with Trinity investments. Obtain a copy of such offering documents from Trinity directly and please read all documents carefully before investing. Returns on investments are not guaranteed, their values change frequently and past performance may not be repeated.

Information contained on this Web site is believed to be accurate and reliable, however, Trinity does not guarantee that it is accurate or complete or current at all times. The information provided is subject to change without notice and Trinity will not be held liable for inaccuracies in the information presented.